Our School of Law celebrates its 100th anniversary. Many professionals, professors, researchers, jurists who have made important contributions to society have been part of it. We will review this School’s history, anecdotes, reflections and challenges. It was born as one little school of jurisprudence that achieved an exponential growth together with our university thanks to the vision of father Jorge Dintilhac. 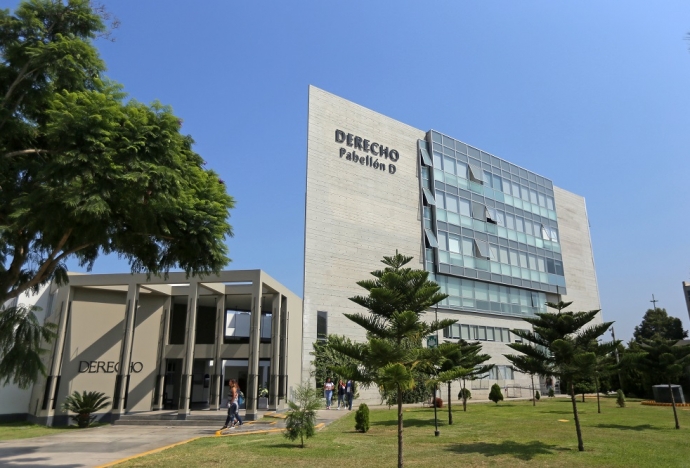 That was mentioned by Mr. Fernando de Trazegnies, former dean of the School of Law and ex-minister of Foreign Relationships in Peru, during his speech within the main celebration of the 75th anniversary of the School in 1994. “The founder’s objective was to create a university academy to teach Law from a Christian perspective. The model (of school) was a Law subject that the Sacred Hearts Congregation taught in Chile. However, as to start Law studies, the founders –mainly, lawyers– decided to open classes of humanities first, where students would be trained and in the space of two years, they would later pursue the career of Jurisprudence. Therefore, this new Law study center would be able to educate future Law students”, said De Trazegnies, dean between the years 1976 and 1987.

100 years have passed since the beginning of the almost legendary academic period in which only three subjects were taught to a small group of students: Philosophy of Law, Civil Law and Political Law, the latter in charge of Carlos Arenas y Loayza, founder of the university and first dean of the new school.

At that moment, it was difficult to foresee the huge growth, impact and importance that, with time, this unit managed to achieve. It is currently ranked as the first School of Law of Peru, according to SUNEDU (National Superintendence for Higher Education) ranking; and at a Latin-American level it is placed among the best 10 according to QS ranking. The fact is that these measurements are a reflection of the work carried out during decades by the members of its community: students, alumni, faculty, and administrative staff.

In one century, 20 deans have led the School of Law and it has moved three times: from La Recoleta school to Camana house within IRA (Riva Aguero Institute); and in 1974, after Lima’s earthquake, with a growing population of students, it became the last academic unit to move to Pando campus, where it was installed in booths and classrooms belonging to other academic units. It was until the end of 1980’s that the current building was built –activities to raise funds were carried out- and in 1991 the Law Auditorium, where today many PUCP events take place, was inaugurated.

In the academic field, education modernization was always a constant, even, more important than infrastructure. One of the milestones that marked the history of the School of Law was the education reform promoted by the “Wisconsin Boys”, a group of professors who, between 1968 and 1971, journeyed to the University of Wisconsin (USA) to receive training with the support of the Ford Foundation. They implemented new teaching methodologies, like active learning, role-playing, problem-based learning and case studies theory. Among the “Wisconsin Boys” we can find Lorenzo Zolezzi, Francisco Oliart, Luis Pássara, Jorge Santisteban, Baldo Kresalja, Eduardo Ferrero Costa, among others.

In this centenary, the School of Law has been able to remain an active institution and to be committed to the country, training professionals with a particular feature. “The School of Law is a solid  institution. It has coexisted with many political regimes and the crisis that many of them triggered in the country could barely affect us. During 75 years, we have trained lawyers who have been public men with a transparent career, honest and well-educated judges, unforgettable professors, and remarkable authors and writers, many lawyers that have combined a creative professional career keeping the greatest values of the rule of Law” words by PhD Lorenzo Zolezzi, in 1994, and that are still valid after one century of institutional life.

With around 1750 undergraduate students and 350 professors, nowadays, the School of Law takes up the challenge to educate new generations of lawyers, jurists and researchers for a society in constant transformation. One of the objectives of this year of celebration is to encourage reflection and debate on topics related to law and society.

The Supreme Decree of the creation of Católica University with two schools: Arts and Jurisprudence is published.

With less than 20 students, classes start at the new School of Jurisprudence in the venue of La Recoleta School located on Francia square. The first dean was PhD Carlos Arenas y Loayza (1919-1934).

The first student of the School is registered: Luzmila Ydoña Mendoza.

Jorge Basadre became professor of History of Peruvian Law and Methodology of History.

The School of Law and Political Science was transferred to the Riva-Agüero Institute.

1965
Foundation of the magazine Themis, directed by students of the School of Law

“Wisconsin Boys”, a group of professors journeyed to the University of Wisconsin (USA) to get trained between 1968 and 1971.

The Law building was inaugurated. Before this year, the classes were taught in booths.

In its 75 years, the School of Law has three master academic programs: Economics International Law, Civil Law and Constitutional Law.

On March 24th, the newest building pertaining to the School was inaugurated, with 6 floors and one basement, in addition to academic and administrative spaces.

Read here an interview to PhD Alfredo Villavicencio, dean of the School of Law, about the evolution of this unit.

The Night of Law “Thinking about the country with a Law perspective”. Renowned alumni and professors will gather in debates, round tables, book presentations, among others.

PUCP obtains international funds equal to US$ 1.2MM for national research on infectious diseases in alliance with the University of California, Davis