Jorge Heraud, director of the Institute for Radio Astronomy (INRAS-PUCP) finds it hard not to show his emotions due to the event that took place last Wednesday 10th: after two years of work the Event Horizon Telescope (EHT) showed for the first time an image of a black hole. It is about the M87, a supermassive black hole discovered in 2017 and observed thanks to a set of eight telescopes located in Chile (2), Hawaii (2), Spain, Mexico, the United States and the South Pole through the EHT. The simultaneous usage of this equipment formed an Earth-sized virtual telescope, which allowed to maximize its reach and observe this phenomenon. 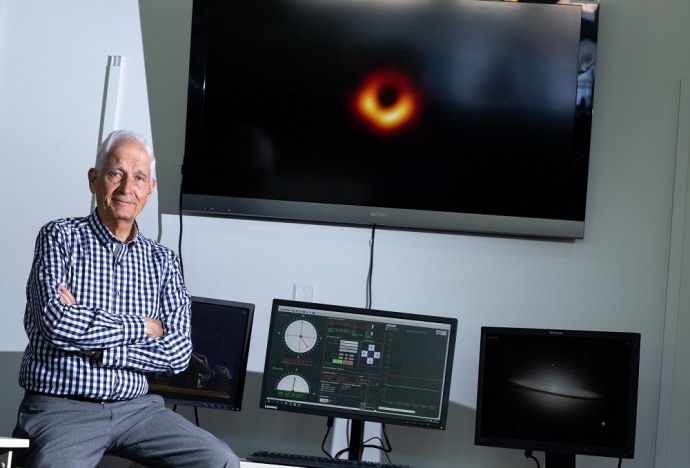 What is a black hole?

According to the theory of relativity it is defined as a singularity: it is a gravitational concentration so high that mass almost disappears. It is concentrated in an infinitely small point and highly condensed so that it blows a hole through the space-time fabric that forms the universe. This hole made is called black hole.

Will be able to see the end of the black hole?

If a person or object fell inside a black hole, it would fall and keep falling. Where does it go? One of the theories says that what enters through a black hole ends up in a “white hole”. These are speculations, nobody really knows where it falls, but we do know that it exits our universe.

Was it still believed that they didn’t exist?

Nowadays nobody doubts its existence, even though Einstein said it was impossible that there might be a disruption in our space-time. He said that one day a limitation to this would be found, although mathematically it was a hole, physically it couldn’t exist and at that time there was no equipment available to identify the physical limitation of a black hole. We are currently seeing for the first time the results of Einstein’s mathematical theory. Nobody doubted its existence, but it is the first time we can see it.

Why hadn’t we been able to see them before?

By definition, black holes are invisible. What we observe is the matter surrounding it, the labyrinth that forms the radiation of that matter being consumed. The absence of radiation in the black hole is due to the fact that it absorbs everything in that zone. In other words, we see the light surrounding the black hole, the shadow. The light wraps it, this radiation is what we can see and the absorbing vacuum is the black hole.

NASA captured images in 2017 and has been working on them since then. It has contrasted data obtained in eight observatories using the interferometry technique. After analyzing them, it has obtained as result, for the first time, the image of a black hole. We could have been able to be part of this group because we have different equipment, material and tools to do it; however, we lack of the radio telescope which work at sub-millimeter wavelengths.

Why can we observe this distant hole and not others?

The black hole of the M87 galaxy is supermassive and produces an enormous amount of radiation, thus it enables us to see it. There are thousands of black holes but, since they are small, they do not emit that much radiation and we cannot see them.