The new book by Dr. Gerardo Castillo Guzmán, professor in the Department of Social Sciences, follows a group of rural families forced to migrate in order to favor mining exploration in Cajamarca. This Thursday, the 18th, you can take part, via Zoom, in the presentation of this publication that bears the seal of the Routledge publisher. 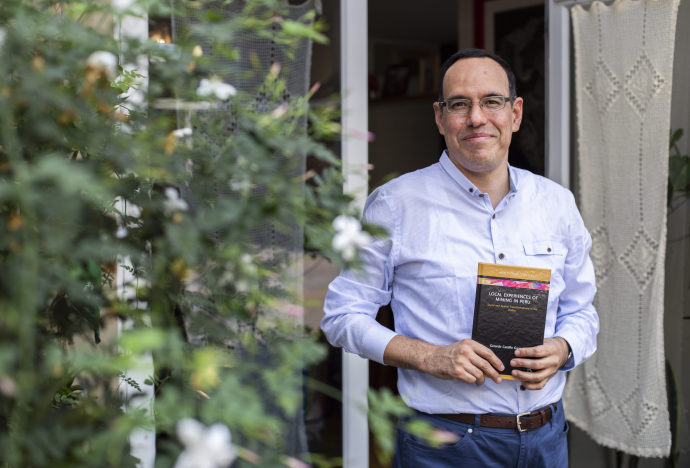 What changes are families living in rural areas near large mining sites in Peru going through? Little has been investigated to date on this topic. For this reason, Dr. Gerardo Castillo Guzmán, professor and researcher at PUCP’s Department of Social Sciences, recently published Local experiences of mining in Peru: social and spatial transformations in the Andes. This book reports the experiences of 15 peasant families from La Granja, a small populated center in the province of Chota, in Cajamarca.

Through the book, we learn the stories of this human group that, in the early 90s, was forced, by the then Government, to sell their land to promote exploration of one of the largest copper deposits in the world.

This publication is based on the results of professor Castillo’s doctoral thesis for the University of Queensland (Australia). For his contribution to knowledge, this work by the Peruvian researcher has been edited and distributed by the prestigious British publisher Routledge. At the moment, it is only available in English as an electronic book.

“I have the expectation that a debate will open about the complexities of rural transformations, and the importance from the Anthropology’s perspective of investigating networks and relationships. Publishing in English, with a publisher of global reach, allows for a greater dissemination of the book,” said Dr. Castillo, who invited PUCP’s community to participate in the virtual presentation of his book, which will take place this Thursday 18th at noon via Zoom (sign up in the box at the end of this note).

See more information about the presentation.

Dr. Castillo’s study collects and analyzes the social and spatial transformations of the migrants from La Granja as a consequence of this mining exploration. This is one of the few investigations that approaches this topic from the perspective of the rural families.

“Among the findings, I discovered that, in the long term, many families improved their finances. Women accessed their own income and became more independent. The younger ones had the opportunity to go to school, ” says the anthropologist, who, for nine months, lived near the families of La Granja for his research.

It must be taken into account that the positive social changes occurred after a long process of adaptation that included moves to other localities, loss of money from the sale of the land, family separations, among other experiences that left their mark.

In the early 90s, the Peruvian Government insisted on attracting foreign investment to exploit La Granja’s copper. Thus, many small farmers had to sell their land for mining. To force them to leave, the State closed the medical post and the local school, and even threatened to accuse those who remained of being terrorists.

Due to technical difficulties in exploring La Granja’s huge copper deposit, none of the initiatives of the three large interested conglomerates prospered over time. Thus, the locals were able to recover their land for a lower price. Some returned to live in the area, while others wait for its value to increase to sell again.

Check here the doctoral thesis of Dr. Gerardo Castillo that was the starting point of the book Local experiences of mining in Peru: social and spatial transformations in the Andes. You can also download a fragment of the book here.