Corrado Daly, an informatics engineer, is the only representative member of a Peruvian university at the Amazon Web Services Educate Cloud Ambassador Program and it comes as no surprise since throughout his career he has been devoted to teaching how to use technology. 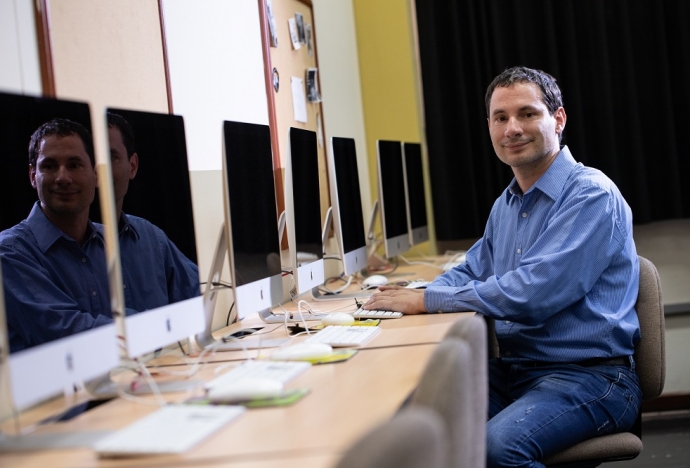 AWS ambassadors are educators who help their academic communities with cloud computing learning. There are 206 selected members in the list of the AWS Educate Cloud Ambassador Program, recently launched by the prestigious Amazon Web Services, and two of them are Peruvian. The only representative of a Peruvian university is Corrado Daly, graduated in Informatics Engineering and professor of our Engineering Department.
“I am really pleased that a PUCP member participates in this program” he says. Daly assumes that he was chosen due to his interest in the Cloud Computing area and the workshops held on that topic.

By mid 90s, Corrado studied Informatics Engineering at our university. Many of his classmates were already in the fourth semester without having used a computer, whereas he had already assembled several. There is even a picture of his preschool years in which he poses next to an Apple IIe. Even though he has always had an affinity for using computers, he points out that his career is not exactly about that. “The informatics engineer’s job is to help others use technology”, he states.

Afterwards, he focused on university teaching, which he has been doing for 14 years. Throughout this time, he has witnessed rapid technological development. A sample of these remarkable changes in hardware and software can be found at the Museo de Microcomputación (Museum of Micro computing), initiative taken by Daly and other Science and Engineering professors some years ago. In this collection, there are two-decade-old computers, floppy disks, retro video games and many other gadgets. It is exhibited for special occasions (e.g. the 100 year anniversary of our university) and currently an app is being developed in order to be able to visit it virtually.

His area of academic expertise includes security and network design, the setting of communication devices, Windows/Linux server administration, among others. However, his main focus is on cloud infrastructure, whether tangible or virtual. Regarding this, he says “It is believed that it is an ethereal place where we can save files, but it offers much more than that, like processing information and performing complex calculations”.

Out of all cloud platforms, the most internationally adopted is Amazon Web Services (AWS). Among the more than a million customers are Netflix, Hubspot and PUCP. “Amazon started as a bookstore in the 90s, but they realized that the computing infrastructure they had was huge and they could hire it to make it profitable. That’s how AWS is born”, says Daly, who has used it for seven years.

The company has the program for education institutions AWS Educate, which allows students to interact with a platform identical to the paid version but for free. Thus, students accelerate their cloud-related learning. This year Amazon launched, for the first time, the AWS Educate Cloud Ambassador Program.

Daly’s main motivation to become an AWS ambassador was to become a member of a network, which is composed of outstanding members in their academic field. “I have the honor to be part of a list in which there are highly-ranked people, among which there are doctors, professors and famous technology disseminators” he says. Another Peruvian member is Mario Surco of Tecsup institute.

This semester, Daly is enhancing cloud teaching in his subject Computer Networks. “I disseminate the use of this technology in our institution and exchange experiences with other professors. These are some of my duties” he points out, excited and taking on the responsibility for being part of a first generation.

In addition to hosting our home on Amazon Web Services, PUCP has strong ties with this company. Daly comments that we are currently registered in the AWS Educate Starter and AWS Research Credits. The first one is available to every member of the university community and provides online access for learning goals. The second one is about credits that can be used for computing resources that AWS provides to research projects in different places.

PUCP obtains international funds equal to US$ 1.2MM for national research on infectious diseases in alliance with the University of California, Davis