The executive director of the IDEHPUCP is the new president of the UN Human Rights Council Advisory Committee. For the first time, a Latin American woman chairs this committee. 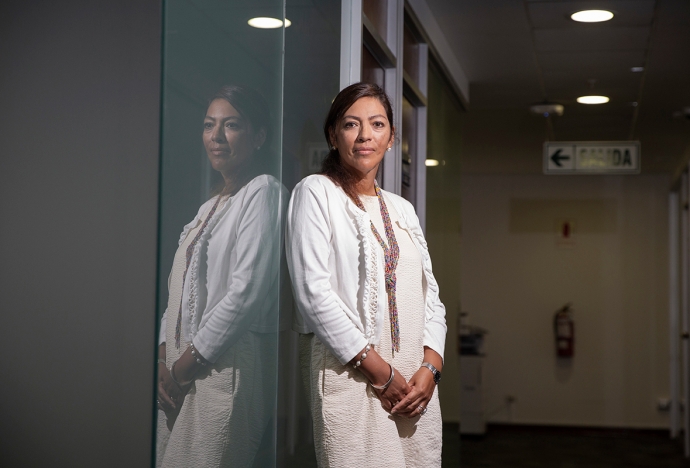 PhD. Elizabeth Salmón, director of the del PUCP Instituto de Derechos Humanos (IDEHPUCP),  (Human Rights Institute), will officially assume the position of president of the UN Human Rights Council Advisory Committee “I feel happy because it is the first time that a woman from Latin America holds this position. I believe it is a mission that will allow me to contribute to the development of human rights in the world. In addition, it is a great satisfaction for me, as a graduate and professor at PUCP, to make the work of human rights promotion and research that we carry out in our university visible at an international level,” stated the lawyer and teacher days before leaving to the UN headquarters located in Geneva (Switzerland). Her appointment is scheduled for this February 18th.

At the end of 2017, the jurist was designated member of this Committee by the Peruvian Government. In just one year, she managed to guarantee an important participation and, therefore, she was named president by the members of the Group of Latin America and Caribbean Countries (Grulac), in charge of the designation of this year.

“In its first decade, the Advisory Committee has carried out a follow-up function to the Human Rights Council, made up of 47 member states. We work as a think tank and review various subjects on human rights, such as leprosy disease or albinism, which in several countries in Africa is a cause of persecution and discrimination; we also deal with issues such as corruption or people vulnerability after conflicts” stated Salmón, who takes on a very complex job as the leader of a group whose interests may become very opposing to those of the member states of the Council.

“It is sometimes a stressful relationship because the Council has rules of action that are political, and there are checks and balances. It is not a court that imposes a sentece, but a space of political coordination to facilitate conflict prevention. For our part, as the Advisory Committee, we act as independent experts and do not represent any Government, but we have the ability to influence this single place,” said the lawyer.

Agenda of the year

As leader of the Advisory Committee, Elizabeth Salmón will participate in two sessions during 2019. The first session will be held from February 18 to 22 and the second is scheduled for the second half of the year. In this first session, the lawyer will meet with the president and vice-presidents of the Human Rights Council, and with representatives of Amnesty International, Human Rights Watch, among other important global organizations promoted by civil society.

During her administration, Salmón will focus on promoting equal opportunities for women. “As a Latin American woman and as part of my academic identity, I am interested in gender equality in the UN work. Despite the efforts that has been made, we are still far from equity within the human rights system. For example, in the Advisory Committee, we are 4 women and 14 men. There is a large presence of women in areas related to discrimination against women or childhood issues, which reinforce stereotypes that establish that women only talk about themselves or they  are only good for taking care of children and that in other areas, our presence is not necessary,”  stated the specialist, who in 2018 presented a report on gender parity to the UN Human Rights Council.

Other topics that she will discuss during her administration are the coordination between various organizations in the field of human rights and communication through the Internet with injured people around the world. “There is a normative and official hyperinflation and I consider the system should more accessible. In addition to our work as consultants, the Committee also receives complaints from people around the world. It is interesting that we can propose topics, not impose but propose some matters that may draw the Council’s attention”, declared the President of the Advisory Committee.